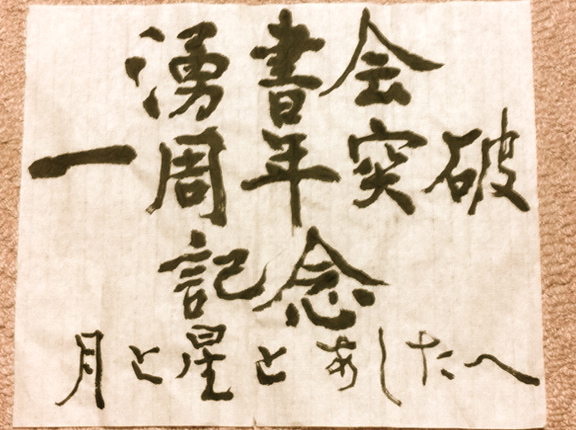 Yushokai had its first exhibition on July 17 and 18, 2013 on the first and second floors of Gallery Kawaramchi. (in Japanese) Below is a revised edition of the note to the visitors at the exhibition.

“To the Moon and the Stars and to our Future”

Here is a rough description of my career as a calligrapher. I first went to a school by a great master of calligraphy without this knowledge about his supreme reputation in the wintertime of my first or second year at the primary school. The first assignment he gave me was to practice two characters, 「一 二」 “One Two”. Grown-up students were taught to write six letters 「一 二 三 四 五 六」 “One Two Three Four Five Six” at the first lesson. But as I was only a kid, I had to practice two characters each time. In the second lesson, it was 「三 四」 “Three Four”. The next time it was 「五 六」“Five Six”.  Naturally, the next lesson was to practice 「七 八」 “Seven Eight”. Our teacher’s wife who was taking care of everything at the school happened to see the letter “Eight”「八」 I was practicing and shouted “This is very good!”, pointing at the letter. Then I wondered why only the teacher’s wife, not the teacher himself said things like that. Maybe, I thought, being a grown-up, she could tell how good or poor we students were doing, even though she was not the teacher.

At that time, I had no idea that she herself was also a well-known calligrapher, of the different type from her husband. Since I was rather an absent-minded child who was doing moderately well at school, I just continued going to his school without much thinking. Besides, because I had no knowledge about other schools, I thought every calligraphy school had that same kind of elderly gentleman teaching just as my teacher did. When I began practicing with him he was a little younger than sixty, I think, but a sixty-year-old gentleman was “an old man” to a kid of seven or eight.

Still, recollecting my young days, I think somewhat I had a notion of his greatness as an artist. And that’s why I did not dare to begin teaching myself even after more than forty-five years of practicing at his school. For, I have always believed one should be as good as my teacher if one wants to be called a teacher.

However, the following three major reasons urged me to start this Yushokai activity.

Firstly, a friend of mine at the workplace unexpectedly asked me to teach her calligraphy, which I did a couple of times in a quite casual manner to her and another young acquaintance I called in just because I was too shy to practice with only that pretty young woman. It was in January 2010.

After that, however, I was not able to find an adequate place to continue practicing together with those two of my friends, which made me totally depressed and nearly gave up the whole idea. It was at this time, President of Nippo Corporation very kindly offered to let us use his office for our practice sessions. And this was the second reason that prevented me from quitting our sessions. Thus, we had a number of sessions in a part of his office. On top of his kind offer to let us use his office, he also let us have some tea after practicing, which made me very grateful, of course, and also gave us warm feelings. What was even more important was that his offer to let us use his office revitalized my will to continue pursuing my career as a calligrapher.

And lastly, as I have kept on reading the warm-hearted articles with much sweet emotions and excellent vocabulary by Ms. Yukari Ishii on her website (in Japanese) who at present a very popular and successful writer and astrologist, I have gradually turned more and more positive and so decided to make this activity a formal one, and named my group “Yushokai.” It was in June, 2010.

Also, that is why I chose materials for this exhibition from Ms. Ishii’s works. Because her field is astrology, I chose “the Stars” as a theme of my works. After that, I found out that the materials that my friends took from Ancient Chinese poetry and favorite phrases among the people in the tea ceremony society for their works all had the word “the Moon.” The title of this exhibition “To the Moon and the Stars and to our Future” has its origin in this interesting coincidence.

By talking about Japanese calligraphy with both Japanese people and people from abroad, I found out there are actually very many people who would like to try calligraphy. But the reality is, they often have second thoughts, feeling reluctant to buy various calligraphy utensils and signing up for a school. This fact made me determine to offer casual opportunities to those people and to contribute what little power I have in order to spread this valued culture, and decided how we have our practice sessions.

I owe what I am and what I possess today to many people: including my teacher and his wife; my parents who generously let me attend his school for so long; many seniors who always kindly give me precious advice; my first student who asked me to teach her; other regular participants; President of Nippo Corporation who kindly let us use his office, developed the websites of Yushokai and this exhibition and designed the exhibition’s invitation postcards and above all, keeps on giving me various suggestions for creation; the owner of this gallery (in Japanese) located in this high-class area in Kyoto who kindly let us use it to display our unskillful works; those who came to Yushokai practice sessions to have a try in calligraphy; those who have been backing up the Yushokai activity. I am simply overwhelmed at the number of people I should return favors.

And thus, I renewed my determination to take over my teacher’s grand wish to familiarize calligraphy in people’s daily lives.